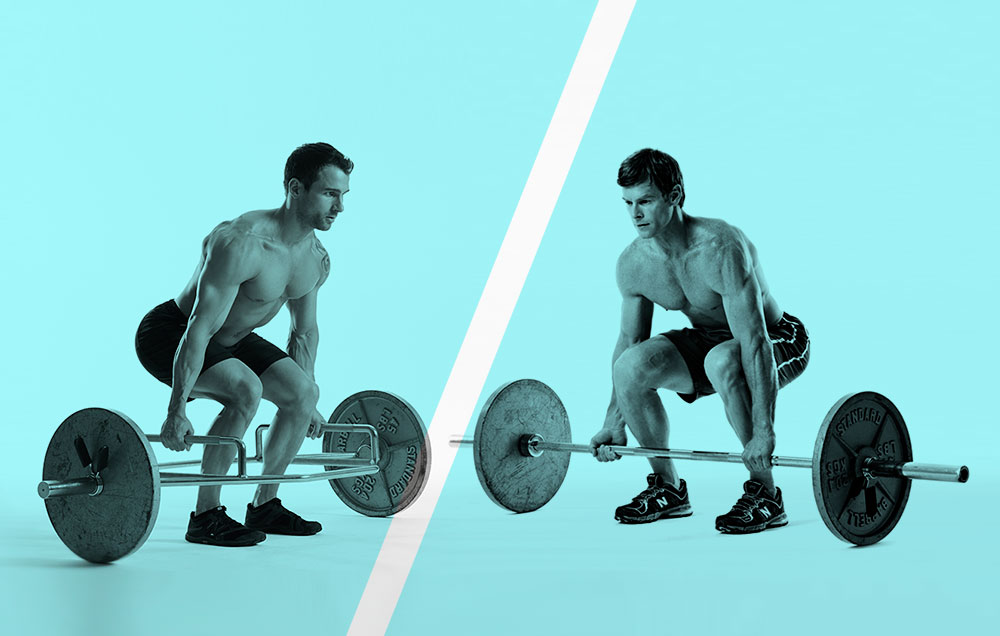 Mens Health: The trap bar isn’t new: It’s been around since the 80s, when according to legend, powerlifter Al Gerard invented it to reduce the stress on his back during deadlifts.   The barbell is shaped like a hexagon in the middle, allowing you to stand inside it rather than holding the weight out in front of you as you would a straight barbell, theoretically reducing the torque on your back.

Researchers had 20 experienced lifters perform deadlifts with a trap bar barbell and a straight barbell while hooked up to sensors that detected which muscles were being activated and how much force and power the lifters were generating.

The verdict: The trap bar activates your back muscles less than the straight bar does. It shifts the load from your back and hamstring muscles to your quads, the study suggests.

“When you do a straight-bar deadlift [2], the barbell is in front of you,” study author Jared Coburn, Ph.D., C.S.C.S., explains. “Even if you keep the bar close to your shins, your arms extend slightly forward in order to grab the bar and pull on it.

“With the trap bar, you’re literally standing inside it so you’re able to grasp the barbell right where your lower limb is. It puts the bar closer to your center of gravity. You’re in a better position to pull where you don’t have the same torque around the lower back.”

Related: The Workout That Fixes Back Pain [3]

The study also found that when guys used the trap bar, they were able to generate more peak force and peak power during the deadlift.

That’s for the same reason that it puts less stress on your back, Coburn says. With the load closer to your center of gravity, your body is mechanically better positioned to perform the lift.

Generating more force and power during each rep could theoretically translate to improved athletic performance and muscle gains, Coburn says.

That doesn’t mean you should ditch the straight bar, though. Your smartest barbell choice depends on what you want to accomplish in the gym, Coburn says.

If you want to target your back muscles and hamstrings—and have no lower back pain or injuries—then the straight bar will obviously be more effective.

Related: The 6 Best Exercises For Your Back [4]

Want to relieve stress on your back, without skipping deadlifts? Grab a trap bar. The trap bar is also a great choice for athletes who want to develop more explosive movements, Coburn says.

For most guys, mixing up the two will lead to best results.

“Doing a variety of exercises over time is good,” he says. “The trap-bar deadlift may look similar to the straight-bar deadlift, but it changes the way the exercise works, so it’d be good just for variety no matter what your training goal is.”